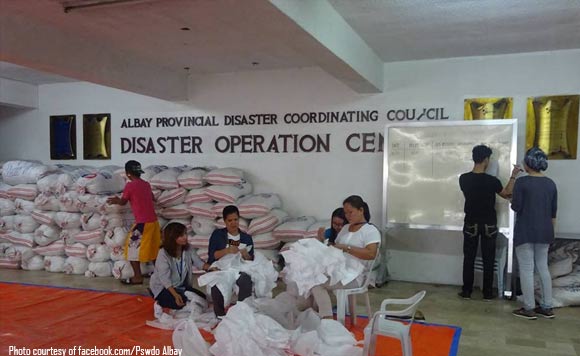 The province of Albay continues to provide relief goods for families evacuated due to the unrest of Mayon Volcano.

More than 12,000 families have fled their homes following the unrest of Mt. Mayon starting last Saturday. The Phivolcs has raised the alert status of the volcano to Alert Level 3.

“More packs will be sent as this will be an ongoing activity as the Mayon Volcano continues to act up,” it added.

Bichara earlier tasked key departments of the province to provide assistance to affected residents as Phivolcs raised the alert status of Mayon to Alert Level 3.

“The Provincial Social Welfare and Development Office (PSWDO) has been repacking relief goods to be distributed to the evacuees and is preparing for an extended evacuation stay as Mayon Volcano has been put in Alert Level 3 and displaced families may be forced to stay longer at the evacuation centers,” the province said yesterday.

“In partnership with City and Municipal Local Government Units, the PGA will provide all the necessary support to ensure that the evacuees receive their basic needs,” it added.

The Provincial Health Office, meanwhile, has already provided N95 facemasks to help protect residents and filter out microscopic ash and dust particles spewed out by Mayon Volcano which could cause health hazards.