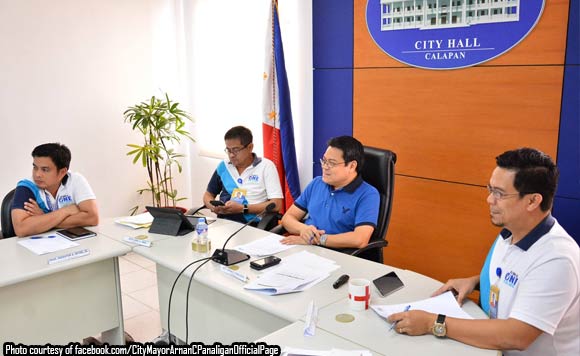 Calapan City Mayor Arnan Panaligan has called on an executive meeting yesterday to discuss the projects to be rolled out this year by his administration.

Panaligan presided the executive meeting yesterday attended by City Government Department Heads/Heads of Offices regarding the several projects in the pipeline including big infrastructure projects.

“City Mayor Arnan C. Panaligan presided over the first meeting of the Executive Department at City Hall,” the city said.

“Among the matters discussed were the priority projects of the City Government for 2018, including major infrastructure projects such as rehabilitation of city roads, construction of alternate and diversion roads, drainage and flood control projects, the proposed city coliseum and convention center, new public cemetery and completion of the new building for the City College,” it added.

Also discussed “were human resource, budgetary and procurement matters, the ongoing business permits renewal and registration, preparation for the 20th foundation anniversary of Calapan City on March 21 and other important matters.”

Panaligan thanked the thanked the department heads for the accomplishments of the City Government last year and asked them to double time and work harder this year for a better and more productive year for the City.

Panaligan, during the last working day of 2017, finished all pending works and signed all documents that needed his approval. He vowed then to have a more productive 2018.

2017 was a productive year for the City Government in terms of plans formulated, programs implemented, projects completed and recognitions and awards received.
The mayor said that he is looking for a more progressive new year with the guidance of the Lord.