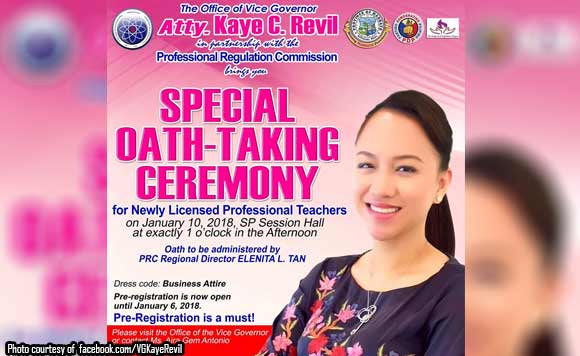 Newly minted teachers of Masbate City need not to worry about traveling far for their oath-taking ceremony as Vice Governor Kaye Revil brings the Professional Regulation Commission to the province.

Revil said that she wants the newly passed teachers to save money and time by no longer travelling to other province just to take their oath for their profession.

“To all our newly passed teachers in Masbate, here’s VG Kaye Revil’s special way of saying Congratulations! She feels for you wanting to save-up, so she endeavored for you to not anymore need to go outside Masbate for your Oath-Taking Ceremony,” the Vice Governor’s office said.

“She requested the Professional Regulation Commission to be the one to go to our Province instead,” it added.

With this way, Revil hopes to bring thr government closer to the people.

“This is among her advocacies of bringing the government closer to its people. Do spread the word to reach those who need this service,” her office said.

The special oath taking ceremony will be held on January 10 at the SP Session Hall at 1:00 pm.

The oath taking will be administered by PRC Regional Director Elenita Tan. The office, meanwhile, announced that a pre-registration is a must.