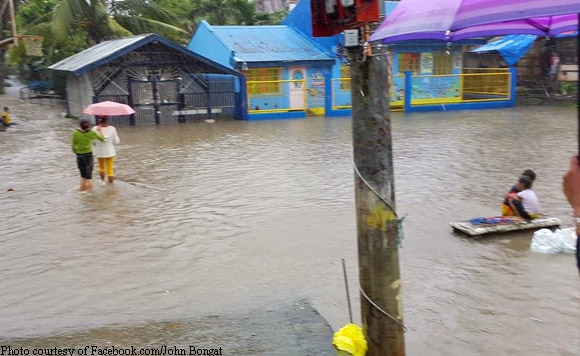 0 839
Share
Want more POLITIKO News? Get the latest newsfeed here. We publish dozens and dozens of politics-only news stories every hour. Click here to get to know more about your politiko - from trivial to crucial. it's our commitment to tell their stories. We follow your favorite POLITIKO like they are rockstars. If you are the politiko, always remember, your side is always our story. Read more. Find out more. Get the latest news here before it spreads on social media. Follow and bookmark this link. https://goo.gl/SvY8Kr

The Office of Civil Defense (OCD) in Bicol said Wednesday heavy rains spawned by Tropical Depression “Agaton” led to the suspension of classes, cancellation of flights and the evacuation of hundreds of people living in flood and landslide-prone areas across the Bicol peninsula.

OCD Regional Director Claudio Yucot said as of 12 noon Wednesday, floods were reported in various towns in the provinces of Sorsogon and Camarines Sur, while landslides hit road networks in Catanduanes, Sorsogon, Albay and Camarines Sur.

Floods were also reported in the towns of Buhi, Bato, Lupi in Camarines Sur and in Irosin, Castilla, Casiguran, Magallanes, Bulusan and Barcelona in Sorsogon.

Classes in all levels were suspended in the provinces of Catanduanes and Camarines Sur while local suspension of classes was ordered in the 12 towns of Sorsogon province as well as in Sorsogon City.

As of 2 p.m. Wednesday, six local government units in Albay suspended classes. These are the municipalities of Daraga; Sto. Domingo; Polangui and Manito and the cities of Legazpi and Tabaco City.

In Catanduanes, Governor Joseph Cua ordered the suspension of classes in all levels as a precautionary measure in view of heightened risks to the students’ health, safety and welfare.

The governor also directed the 11 Municipal Disaster Risk Reduction and Management Councils (MDRRMCs) to be prepared to carry out their respective disaster risk and reduction plans focused on flood, wind, landslide and storm surge-prone areas of the province and to conduct an inventory of the number of vulnerable population groups that need to be evacuated once the weather situation worsens.

The local weather station has forecast continuous heavy rainfall in the Bicol region due to Agaton.

The Department of Public Works and Highways (DPWH) on Wednesday announced that a landslide hit at least five major road networks in the towns of Viga, Caramoran and Gigmoto in Catanduanes.

Lucy Castaneda, DPWH-Bicol spokesperson, in an interview, said the affected roads are not passable to all types of vehicles as landslide debris covered the two-lane road in these areas.

She said the affected road networks are the Catanduanes Circumferential Road in Barangay Summit in Viga; Barangay Giamlong in Caramoran; and the Baras-Gigmoto-Viga Road in Barangays Dororan and Biong in Gigmoto town. (PNA)