Nearly 10,000 persons evacuated from 9 towns in CamSur due to floods, landslides 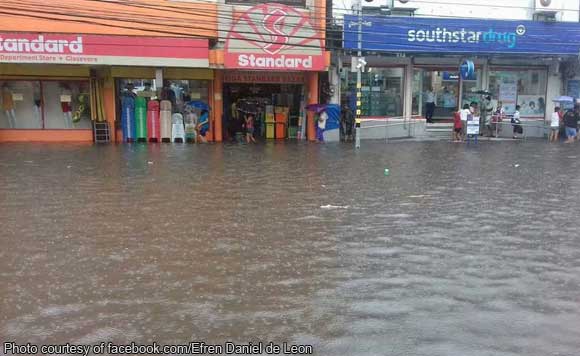 0 795
Share
Want more POLITIKO News? Get the latest newsfeed here. We publish dozens and dozens of politics-only news stories every hour. Click here to get to know more about your politiko - from trivial to crucial. it's our commitment to tell their stories. We follow your favorite POLITIKO like they are rockstars. If you are the politiko, always remember, your side is always our story. Read more. Find out more. Get the latest news here before it spreads on social media. Follow and bookmark this link. https://goo.gl/SvY8Kr

Heavy rains for the past four days caused floods and landslides in nine towns of Camarines Sur, resulting in the evacuation of 2,267 families or 9,322 individuals, the Office of Civil Defense (OCD) in Bicol said Friday.

Yucot said the heavy rains were brought by the tailend of a cold front prevailing over the Bicol region.

In her report, she said flooding as high as 1.5 meters was reported in three barangays in Lupi town when a spillway overflowed, forcing villagers to use boats as mode of transportation.

In Albay, Governor Al Francis Bichara on Friday also ordered the evacuation of villagers living in flood- and landslide-prone areas in the towns and cities situated at the eastern seaboard of the province affected by intense rains. However, no figure was given as to the number of evacuees.

Cedric Daep, chief of the Albay Public Safety Emergency and Management Office (APSEMO), in an interview said the evacuation order was a preemptive disaster mitigating measure.

He said intense rains have overly saturated the soils in Albay, noting that “continuous 8mm rainfall per hour could saturate the soil that can trigger flooding and land mass to cascade down mountain slopes.”

Melody Azur of the Legazpi City Disaster Risk Reduction and Management Office (CDRRMC) said floodwaters from one foot to shoulder-deep inundated several low-lying villages in the city’s business district as well as in the northern district.

She blamed the flooding to the wrong garbage disposal practice of residents that has resulted in clogged drainage systems.

Rivers, according to Azur, are now silted and constricted because of the waste thrown by residents along the channels. (PNA)