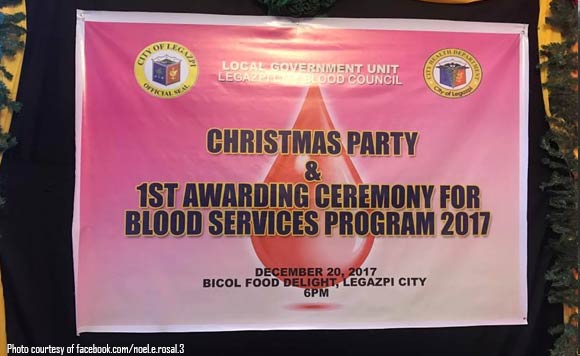 Legazpi City Mayor Noel Rosal has presented awards to the local government’s partners in its blood services for this year.

Rosal said that the partnership they built has yielded positive results as the city became one of the top blood donors in Bicol Region.

The mayor said that for the past five years, the Legazpi City was able to provide at least 2,000 bags of blood per year.

“LGU legazpi consistently contributed more than 2000 bags of blood per yr in the last 5yrs, making us one of the top in bicol region and a multi-awardee LGU for sandugo program,” said Rosal.

Rosal expressed gratitude to everyone that helped the City, particularly the University of Santo Tomas-Legazpi, Bicol University, the Armed Forces of the Philippines, Bureau of Fire Protection and the Philippine National Police.

He also thanked the Philippine Navy, Coast Guard, Marines, Tau gamma Phi, Bombo Radyo, Liga ng mga Barangay, among others, for their support to the city.