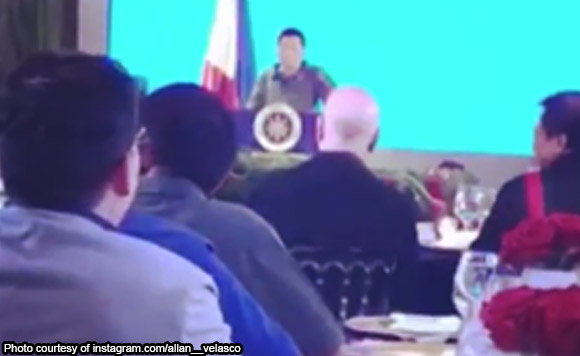 It’s a roasting he can’t object to, coming from President Duterte himself.

Marinduque Rep. Lord Allan Velasco was the subject of some ribbing from the President during his 40th birthday bash at Malacanang.

In his message for Velasco’s birthday, Duterte, who is known for his love of women, talked about marriage and fidelity.
According to him, husbands are faithful in the first few years of marriage. But their gaze tends to wander when the union hits the 15 year mark. He called on the wives to listen, as he was telling the truth, he said.

Then he let loose a bombshell that had Velasco’s guest in stitches.

Thankfully, he did not into detail about what the congressman did, but we can make an educated guess.

Velasco himself alluded to his transgression in his caption for the video of Mr. Duterte’s roasting of him that he shared on Instagram.

“Finally, was able to muster the courage to post the video of the President’s roasting of Yours truly hehe!!😂😖 Love you B!!❤️ I Promise it will never happen again🙏🏻 #Forgiveness #TrueLove #Forever #MyBaby❤️” the congressman posted.

Finally, was able to muster the courage to post the video of the President’s roasting of Yours truly hehe!!😂😖 Love you B!!❤️ I Promise it will never happen again🙏🏻 #Forgiveness #TrueLove #Forever #MyBaby❤️