Naga City: No suspension of classes, work due to transport strike 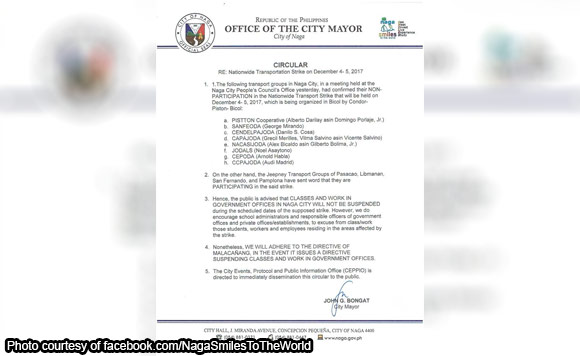 The City of Naga will not suspend classes and work on Monday despite the scheduled nationwide mass transport strike on December 4 and 5.

The Naga held a meeting with transport groups in the locality and confirmed that they will not participate in the 2-day strike.

According to the city, the following transport groups will not join the strike:

“On the other hand, the Jeepney Transport Groups of Pasacao, Libmanan, San Fernando, and Pamplona have sent word that they are PARTICIPATING in the said strike,” the City said.

Hence, classes and work will not be suspended on Monday and Tuesday.

“However, we do encourage school administrators and responsible officers of government offices and private offices/establishments, to excuse from class/work those students, workers and employees residing in the areas affected by the strike,” the city said.

Moreover, the city said that it will adhere to the directive of Malacañang regarding the suspension of classes and work if there’s any.