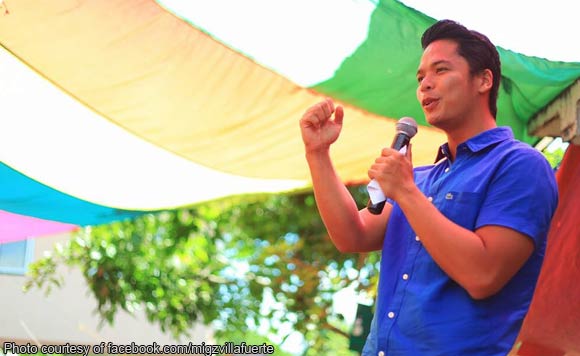 0 541
Share
Want more POLITIKO News? Get the latest newsfeed here. We publish dozens and dozens of politics-only news stories every hour. Click here to get to know more about your politiko - from trivial to crucial. it's our commitment to tell their stories. We follow your favorite POLITIKO like they are rockstars. If you are the politiko, always remember, your side is always our story. Read more. Find out more. Get the latest news here before it spreads on social media. Follow and bookmark this link. https://goo.gl/SvY8Kr

Camarines Sur Governor Migz Villafuerte is looking to strengthen so-called local rice granaries such as the town of Libmanan as a way to counter a possible rice supply shortage.

This was bared by a Brigada News FM Naga report Tuesday (May 16), after National Food Authority (NFA) Provincial Manager Yolanda Navarro relayed the potential problem to the governor’s office.

Villafuerte said he has already held a meeting with Department of Agriculture (DA) Secretary Manny Piñol regarding the matter.

Libmanan is a first class municipality in Camarines Sur known for its fertile soil. It has long held the tag of “rice basket.”

The young politiko reckoned that it’s normal for the Philippines to encounter rice supply shortages due to the fact that it’s a rice-eating country.

Also on Tuesday, the NFA bared that it’s buffer stock for rice will only last for eight more days, seven less than the required 15-day minimum stock.

Villafuerte stressed that his office will do everything it can to protect his constituents from such shortage.